Here is the Meezer Monday Miles report for today:

The Foods Report - there was a cookout this weekend - there was pig ribs and cow ribs and hamburgers (wifout ham) and chick-hen.  We gots a little bit of the chick-hen.  The rest was "too spicy" for us.  Flames shmames.  GIVE ME PIG!

The What Did Billy Do to get in trouble this week report: he only ranned out twice - but not during the cookout 'acuase we was LOCKED IN THE BEDROOM

The What did Nicky to go get in trouble this week report: He knocked down the table in the hallways in the middle of the night and scairt the mom nearly to death!

The Sammy Report - by Sammy:  Ok, so Friday the mom wented out and something happened here which I'm not saying, and when she camed home mine lower right fang was sticking straight out of mine mouf. (and Billy was hissing at me and Miles, and he NEFUR hisses at anyone, but we're not telling what happened). It was too late to go to the v-e-t friday night so I gotted hauled there on Saturday to haf mine fang pulled out.  NOW I has to go back Thursday night and STAY OVERNIGHT (wif ALIENS!! AHHHHHHHHHHHH) and haf surgery Friday morning to get the rest of the root out and then they is going to poke around mine mouf. I telled the mom not to do it 'acause it's too many green papers that she doesn't haf, but she says it cannot be put off and that we will just haf to do wifout some stuff for a monf or so, like maybe our innernets. So there is a possibility that we will be gone for about a monf or more.   I doesn't want to got to the v-e-t to haf surgery!   I doesn't want to be around the aliens! I doesn't want to be away from mine mommy for a whole night! Please tell her not to make me go!

Uh oh, Sammy...We really do think it's for the best that you go and have that root removed. We know it's scary and awful, 'cause all three of us have had dental $urgery since last November, with multiple extraction$. It doesn't seem like now, but you'll feel better after, we promise!

Astrid (…and the kitties too) said...

uh oh that does not sound goods...
hmmms, your new blog design makes our computer go whacky so we could not look closer: do you have a tip jar (paypal)? maybe we could share some of our allowance wif you.

Oh, Sammy, yew needs to go to the V-E-T. It really is for the da bestest. We all will be purring and purraying for you, your the mom, and the rest of you.

Oh Sammy did the aliens come and attack you and make your toof get all loose or did you do it headbutting Billy? Anyway you need to have the tooth root removed or you could have a very nasty ouchie.

oh, yes, please, dear sammy, get that fang taken care of!! i just had to have a wisdom tooth taken out, an' while it wasn't fun, it woulda been worse if i hadn't!! please tell yer mom-lady-person to trot out the tip jar, we will be furry happy to help you, buddy!!

Oh, no Sammy, that doesn't sound good! Let the vet take care of your tooth and you'll feel better. We'll still be here when you get back! Sending healing purrs!

Sammy....we are so sorry that you have to get your teefie fixed. Mommy says that you are a big boy and it won't be that bad. Purrs!!!


Meezer Mommy: we can help with the green papers!!!

Sammy, we are really sorry... though we totally think it's the aliens that made this happen.

PS: Count us in for a few green papers. Just let us know how to help.

Oh noes about your tooth, Sammy!

Barbecue sounds wonderful - glad you at leats got check-hen.

Oh Sammy! That is terrible. That happened to Georgia--the Woman was protecting Simone and Georgia went to attack and ran into the Woman's hand--err.. probably her fist and she knocked loose a tooth. She felt so bad...

Sammy that really sucks! We're sorry you have to go have dental work. Your Mom is right though, it has to be taken care of right away or it will just turn into an even more expensive problem. Purring for you buddy!

We were laughing, especially about the table in the middle of the night, until we read about your tooth, Sammy. We think the tip jar is a great idea.

Poor Sammy. Be brave little man, it's scary but you will feel a lot better after your surgery.

Oh man, Sammy, what the heck happened?? We sorry you gotta have surgery, but it sounds like it's something you really need. We'll be purring for you!!

Going to the v-e-t is never fun, but your mom knows that you need to get your tooth looked after. Take care and sing real loud!

ohhhhhhhhhhh boy. whatever you dids, it's costing ya. well, your mommeh realleh. tell her to put up a ChipIn button for halps wif the cost. it will be too hard to go wifout our furrends for a whole month!

Sammy, I hope you get the surgery because then you will get better.
You boys can let your mom relax for a month, kind of like a vacation from the nets.
We know how everything costs so much, even people surgery costs a lot too.
I will just purr that everything works out right!

You boys sure do get into the most interesting situations. Sorry about that pointy toofer Sammy.

Is some buddy a tattle tail? BOL We have a feeling momma has a lot of patience
Benny & Lily

Sammy goodness we wonder what went on while your mom was away! We will purr for the hurty stuff to feel better soon.

Oh Sammy, it would be SOOO much worse for you if your theMom didn't take you in for surgery!!! We hope everything turns out alright & that you're as good as new soon!!

We can help out some with those green papers, too - we just need that donate jar!!

Da Boys saySammy!! Don't do that! You have to go to the vet when your mommy says so. We wish we had some green papers to send you but mom says all of ours have disappeared. We hope that everything is all better soon! We're sending purrs & prayers from here!"

Mommy is right, effun tho we hate to admit it, dat toof hasta be taken care of! We would teleport to da vets and keep yoo company and we bet lots of yoor other frends would too.

Sammy
I will be right ofur to hold your paw....

okays, good to see you put the tip jar out! we just donated, hope it helps a little bit.

Sammy my old friend, I hate to say it, but this doesn't look good for you. My vet stole a tooth from me once and I NEVER got it back,, either! We'll be thinking about you purring.

Astrid (…and the kitties too) said...

*pling* we throwed something into your tip jar. hope it helps a little :)

Pee Ess: we all three came home with a clean bill of health (and about 320 green papers less in mommas purse) Auntie Doktor Renate was very pleased with us. Except for Kashims heart is in a little trouble but we gotted new meds for hims and for Othellos eyes. it wasn't too bad too except for this poking with needles...

luv alla us! please holler if there is anythinf we can help with!

Oh Sammy we are sending you lots of purrs and prayers about your surgery - we know how much it stinks to be stuck at the vets. We hope it goes well - we are gonna try and see if mom can donate to help out a little (mom may need a few days to do that however).

Oh Sammy, we are so sorry to hear about your fang and impending surgery. We will be purring for you and send you a few $$ when we can.

Memories of Eric and Flynn said...

Yup, you need to get that root removed. Our mum went to the dentist today as well and she has to have root canal surgery cuz she had teef aches all weekend. Auntie Biotik has to help her feel better first though.
The food sounds like it was good at the weekend with all those ribs.

We're sorry that your toof has a problem and that you have to go back overnight with the aliens. We're pretty sure aliens that are at the V-E-T are harmless (they give them drugs) so you should be okay.

We're throwing some green papers in your jar.

Sniffie and the Florida Furkids

Poor lad. Chin up all will be well soon. Purrs and prayers to you.

Dood, better to go and get it over with. Otherwise it's just gonna be a giant PITA and get all nasty and infected and then your mouth will smell and Billy or Nicky will try to stick their head in there to investigate, and you'll be ALL kinds of upset. Just don't get mad at the kitties who drop some change into the tip jar. It's fer your own long term good. And by good I mean keeping Billy out of your head.

Sammy you need to have your mouth fixed! Just do it.

Billy, mum doesn't have whiskey unless you wants some Southern Comfort.

Cookout food is "too spicy"? Please explaine to your mom that the spicier the foods, the better we like it.

Sammy, be brave about the V*T. You'll feel a lot better after that fang root is gone. If you let it go, you're gonna have all kinds a troubles later on.

Wow, you guys are really livin the fast life! Keep up the good werk...

Good bye my sweet sweet Nicky.  You has a hard time sometimes with your brain injury, but you were always so sweet.  I love you to the moon... 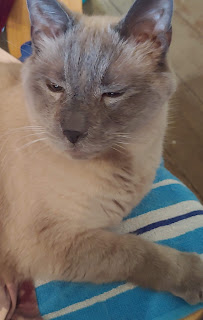 We is in the process of updating our links 'acause Blogrolling is not doing a good job.